which would make it only 16 hours from my last post, right? Wow.

Today we got our mentor assignments. I’ll be working with Alicia Ostriker (Yeah!), who was my first choice, because I want to launch right into exploring poetry and liturgy. But everyone here is so great that I could be doing great work with anyone. Next semester I think I’ll ask for someone whose work is really different from mine, to help me push the ways I boundary my own writing and thinking.

But for now — Alicia, yeah!!! I’ve been reading and using her work in my own for so many years now.

Also got the full review of what will be due and when. All I can say is this — please invite me for meals from time to time, okay, so I remember to leave my desk and eat actual meals? Or ask me to walk in the park so I don’t fade to some kind of ghastly pallor. (ok, given that I’ll be spending time in Miami, the latter is not a given, but still….)

Today was a lecture about how sound and form influence the meaning of a poem. Like the books I’ve been reading about poetic form, the talk pushed me to know I have to deal with this stuff. In college, back in the olden days, I hated formal poetry, but of course it was all by straight white men and so irrelevant to my life. Now I have so many examples of how writers use formal structures to make radical new meaning, so I have no more excuses. Poet Dan Bellm, in his book Practice, has a crown of sonnets (a complicated interwoven pattern) that links Torah, his own Vietnam experiences, the Gulf War, and the situation in Israel/Palestine. In rhyme and meter that is totally background on first read, as the content and language sweep you along. But anything remotely similar I would try right now would be narrative and take four times as many words — the boundary of the form makes the language so tight and clear. I wanna do that. Not sure how, but I know what I’ll be doing for the next two years.

Great quote from William Stafford — as we write and rewrite, he says, “strange things with meaning begin to occur.”

Tonight’s faculty reading was Martin Espada and Ross Gay. I’ve heard Martin several times over the past year, so had heard all the pieces but one before, but he is a wonderful, engaging, bold, and funny reader, so one more time is never a problem. Everyone here was freaking out about the imminent arrival of an ice storm, but Martin just laughed, since he lives in Amherst, MA. “Western Mass,” he explained, “is like Canada but without the health care.”

Ross Gay was new to me when I applied to this program. He grew up in Levittown, and writes often about Philadelphia, and is just a damn fine writer. I knew the pieces from his book Against Which, but he also read new poems, which were just breathtaking. One great line: “praise the body/its miraculous stutter and thrum.”

One of his poems nearly made me cry, though, for it was about a boy and an old old dog named Max. Earlier today, Hannah called to say she had to put down her cat Max. He was 20, and had been having seizures for a while. Last night he just crashed. I’ve only known Max about a year and a half, but he had a huge personality, and I really cared about him, and I’ll miss his cranky old self. The picture is Max sleeping on Hannah’s temporary bed the first morning in Miami. 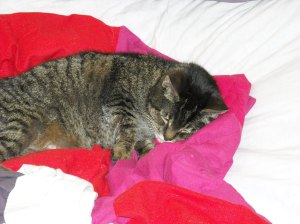