Happening now at #poetrylive via @thisfrenzy is Queen of the Platform by Laura Madeline Wiseman from Anaphora Literary Press. I first met Madeline at a Split This Rock workshop she ran which gave me starts on 3 different poems. Then two sections of my long piece “Wanting a Gun” were accepted for her amazing anthology Women Write Resistance: Poets Resist Gender Violence. And now I have her newest chapbooks in my happy fan hands and wow, I’m full in from the first poem.

Follow along as I read, sharing lines and images and poems that move me, startle me, shake me up! 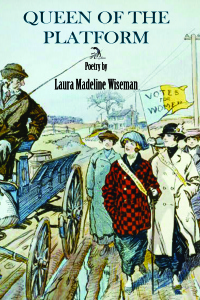 From the cover copy:

These poems are based on the life of Laura Madeline Wiseman’s great-great-great-grandmother, the nineteenth century lecturer, suffragist, and poet, Matilda Fletcher Wiseman (1842-1909) and the men in her life: her brother, George W. Felts (1843-1921), a civil war solider who was later charged with murder, her first husband, John A. Fletcher (1837-1875), a school teacher and a lawyer, and her second husband, William Albert Wiseman (1850-1911), a minister who became her agent. Like her seven brothers who served in the Civil War, Matilda chose the public sphere. After the death of her only child, Matilda joined the lecture circuit. She spoke to support herself and her first husband, until his death. On the stage she spoke among other lecturers of her time, such as Susan B. Anthony.